Multicenter Prospective Study of More Than 4,000 Patients Shows WATS3D Increases Detection of Pre-Cancerous Changes in the Esophagus by Over 80%


SUFFERN, N.Y., March 22, 2018 (GLOBE NEWSWIRE) -- CDx Diagnostics, developer of WATS3D, or Wide Area Transepithelial Sampling with 3D Tissue Analysis for the detection and surveillance of Barrett’s esophagus, today announced results from a recent multicenter prospective trial of more than 4,000 patients, demonstrating that adjunctive use of WATS3D increases the detection of both Barrett’s esophagus and esophageal dysplasia by over 80%. The study results were published in the latest issue of United European Gastroenterology Journal and featured in the American Society for Gastrointestinal Endoscopy (ASGE)’s Scope Tech Talk video series (https://www.youtube.com/watch?v=jeARjK_NDHM&feature=youtu.be).

Esophageal adenocarcinoma, one of the most fatal and fastest growing cancers in the US, can be prevented if detected at a precancerous stage. Gastroenterologists perform more than five million upper endoscopies each year on patients with chronic heartburn and Barrett's esophagus in an effort to find these precancerous cells before they can progress to cancer. A major problem with this strategy is that prior to the availability of WATS3D endoscopists had to rely on taking small random forceps biopsies at 1-2 cm intervals to find these abnormal cells, leaving more than 96% of the endoscopically suspect area completely untested.

Detection of Dysplasia and Barrett’s Esophagus 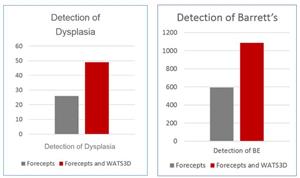 With the availability of WATS3D, doctors are able to rapidly collect a sample from a much larger surface area of the esophagus. By combining a larger sampling area with patented 3D imaging and expert cytopathology, WATS3D has far reaching implications for protecting a patient’s health. If precancerous cells are present, they can now be easily detected and removed or destroyed before they become cancerous – essentially preempting esophageal cancer.

The multicenter prospective trial was conducted at 25 community-based gastrointestinal (GI) centers across the United States. In the study, 4,203 patients were tested for esophageal disease. The findings show that with the inclusion of WATS3D overall detection of Barrett’s increased by 83%, while the detection of dysplasia increased by 88%. The study concludes that the sampling error can be improved dramatically with use of this adjunctive technique.

"Without WATS3D, gastroenterologists are forced to rely on chance, hoping that one of their small random forceps biopsies will happen to land on a highly focal area of precancer that may exist in their patient's esophagus," said Mark Rutenberg, Founder and CEO of CDx Diagnostics, the developer of the WATS3D diagnostic system. "Now that we can more easily treat esophageal precancer through endoscopic ablation, the remaining obstacle to preventing the most rapidly growing cancer in the US is to more reliably identify those GERD and Barrett's patients with these still harmless but precancerous changes so that we can treat them in time to prevent their progression to adenocarcinoma. These results clearly demonstrate that WATS3D can very effectively help to fill that critical gap in current routine GI care."

“This study exhibits the fundamental limitation with standard forceps biopsies in the setting of Barrett’s diagnosis and surveillance and sheds light on the 'sampling error' phenomenon that may provide false reassurance to both patients and GI professionals,” said Dr. Vivek Kaul, Segal-Watson Professor of Medicine and Chief of the Division of Gastroenterology and Hepatology at the University of Rochester Medical Center. “These results clearly demonstrate that the wide-area sampling and expert analysis aspects of WATS3D technology can effectively help fill the information gap in diagnosis and surveillance for patients with Barrett’s esophagus.”

The WATS3D study was also highlighted as part of the ASGE’s Scope Tech Talk video series and distributed to over 15,000 members in January 2018. https://www.youtube.com/watch?v=jeARjK_NDHM&feature=youtu.be

About CDx Diagnostics
CDx Diagnostics’ mission is to provide clinicians with easily implemented, cost effective tools to preempt cancer through enhanced detection of precancerous change. This is accomplished by a proprietary diagnostic platform that synthesizes computer imaging, artificial intelligence, molecular biology and three-dimensional cytopathology to detect precancerous change earlier and more reliably than prior methods. CDx tests require only a few minutes of practice time, are highly cost effective, widely reimbursed, and address a recognized critical gap in the current diagnostic standard of care that results in thousands of otherwise unnecessary cancer deaths each year. Routine clinical use of CDx testing in the oral cavity and esophagus has prevented thousands of cancers, and application of the CDx diagnostic platform to prevent cancers of the throat, bile duct, stomach, and surveillance for dysplasia of the colon in patients with IBD is currently in progress.

About WATS3D
CDx Diagnostics’ WATS3D addresses the major inadequacies inherent in current random forceps biopsy testing of the esophagus. In just a few minutes, endoscopists can easily obtain a wide area, full-thickness transepithelial tissue sample for computer-assisted 3D laboratory analysis by expert pathologists. In large multicenter clinical trials, WATS3D has been found to significantly increase the detection rate of both Barrett's esophagus and esophageal dysplasia. The high sensitivity and inter-observer agreement of WATS3D is due to the larger tissue area sampled, and the proprietary 3-Dimensionial computer imaging system that is based on an algorithm developed as part of the U.S. Strategic Defense Initiative missile defense program. To learn more about WATS3D, visit www.wats3d.com.