New Study Results Published in the American Journal of Gastroenterology

SUFFERN, NY--(Marketwired - Sep 10, 2015) - Prevention of Esophageal Adenocarcinoma, the most rapidly growing cancer in the US and one of the most fatal, relies upon the detection of precancerous cells sampled during an endoscopy. This has historically been hampered by low inter-observer agreement among pathologists when examining esophageal tissue samples using a standard manual microscope. CDx Diagnostics today announced results from a study examining inter-observer agreement rates among pathologists using the WATS3D three dimensional computer-assisted biopsy system. The study, published in the September issue of the American Journal of Gastroenterology, found that the diagnosis of Barrett's esophagus and associated dysplasia using WATS3D has a rate of inter-observer agreement that is significantly higher than published estimates for standard manual microscopic assessment.

The WATS3D biopsy collects a wide area, disaggregated tissue specimen of the entire thickness of the suspect epithelium resulting in a 100 micron thick smear. Standard biopsies are mechanically cut into thin, 2-3 micron slices in order not to exceed the very narrow depth of field of a standard manual microscope. This century-old process alters much of the natural appearance of the tissue and can deprive the pathologist of potentially important diagnostic information. In a manner somewhat analogous to how a CAT scan combines multiple two dimensional x-rays to form a single three dimensional image, the WATS3D computer integrates over 100, one micron thick optical slices to form a single three dimensional image in which potential abnormality is highlighted to the pathologist. 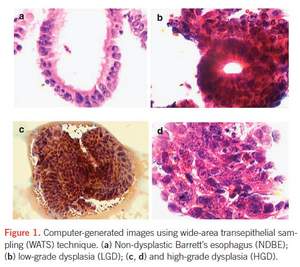 The histopathological diagnosis of Barrett's esophagus-associated dysplasia has poor inter-observer agreement even among experienced gastrointestinal pathologists.1-3 Published estimates for the inter-observer agreement ("kappa values") in the reading of dysplasia in Barrett's esophagus have varied between 0.15 and 0.69.1,4 Kappa values of 0.41 to 0.60 indicate moderate agreement, 0.61 to 0.80 indicate substantial agreement, and above 0.80 indicate nearly perfect agreement (Landis and Koch scale).5

In the study evaluating inter-observer agreement with WATS3D, a total of 149 Barrett's esophagus slides were evaluated in a blinded manner by four pathologists. The slides included the following: no dysplasia (n=109), low-grade dysplasia (n=18), and high-grade dysplasia or esophageal adenocarcinoma (n=22).

"These data suggest the WATS3D biopsy can help overcome the limitations of traditional histopathological assessment of esophageal precancer," said lead author Prashanth R. Vennalaganti, MD, Division of Gastroenterology and Hepatology, University of Kansas School of Medicine, Kansas City, MO. "WATS3D uses a computer neural network that chooses the 200 most suspicious areas from the biopsy and projects the same cells on a computer monitor to every pathologist evaluating the sample. This may potentially explain the high inter-observer agreement observed in the study."

"One of the most meaningful findings in this study is the high inter-observer agreement for the diagnosis of low-grade dysplasia, which has historically had the lowest rate of agreement even among expert pathologists," said Lauren Gerson MD, MSc, Associate Clinical Professor of Medicine, University of California San Francisco. "Improved detection of low grade dysplasia will allow more gastroenterologists to change their surveillance protocols or perform endoscopic interventions for this patient cohort."

WATS3D has been commercially available in the United States since 2012. Visit WATS3D.comto learn more.

About CDx Diagnostics and the WATS3D Biopsy
CDx Diagnostics' mission is to provide doctors with the most powerful diagnostic technology to help prevent cancer before it can start.

CDx Diagnostics' WATS3D biopsy addresses the sampling error inherent in random forceps biopsy testing of the esophagus. In just a few minutes, gastroenterologists can easily obtain a wide area, full-thickness transepithelial tissue sample for computer-assisted 3D laboratory analysis. In clinical trials, adjunctive use of CDx Diagnostics' WATS3D biopsy significantly increased the detection rate of both Barrett's esophagus and esophageal dysplasia. The high sensitivity of WATS3D is due to the large tissue area sampled, and the proprietary 3-Dimensionial computer imaging system that is based on an algorithm developed as part of the U.S. Strategic Defense Initiative missile defense program. To learn more about WATS3D, visit www.WATS3D.com.